How to identify and convert between different data types in R

Most of us are pretty familiar with data types in our daily lives — we can easily tell that things like 1, 2, 3, and 4 are numbers (in this case, integers). 15.7 is still a number, but has a decimal. We know that every single word I’m typing in this sentence is composed of characters, and we know that in math, “true” and “false” are the answers to logical statements.

Just as we do in our heads, R also categorizes our data into different classes. These categories are similar to the real-life ones I described above, but can be a little different in terms of syntax and things to watch out for in your code.

To work in R and perform data analyses, you’ll need to have a solid understanding of data types. In this tutorial, I’m going to introduce several different types of data, explain how to use and manipulate each of them, and show you how to check what type of data you have. Let’s dive in. 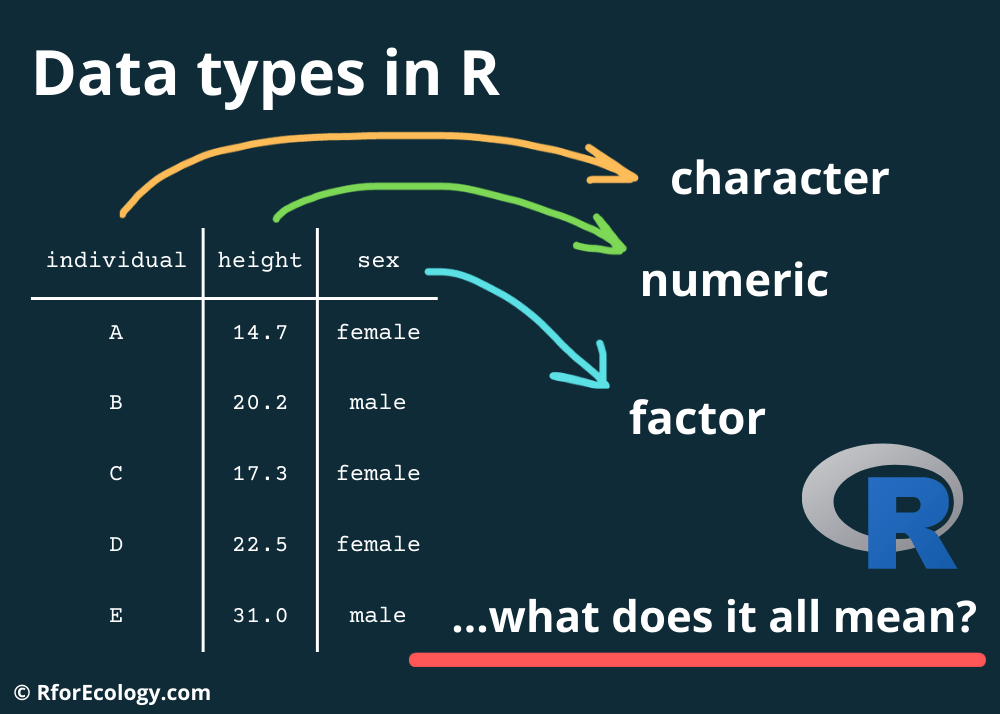 There are five main types of data in R that you’d come across as an ecologist. I’ll discuss all of them below except complex numbers, which are rarely used for data analysis in R.

I’m also going to discuss a sixth, related category that helps you work with categorical variables:

Numeric data types are pretty straightforward. These are just numbers, written as either integers or decimals. We can check if our vector is numeric by using the function is.numeric().

You can, of course, perform mathematical operations with numeric values.

You can also do math with integers, which represent numbers without decimal places. These are usually used if you’re counting something — for example, you can observe 7 butterflies in a plot, but you can’t observe 7.2 butterflies (or at least I hope not!).

If you create a vector manually and don’t have any decimal values, R will still identify your vector as the class “numeric”.

You can change this vector to be an integer by using the function as.integer().

Alternatively, you can generate an integer vector like this. The “L” after each number tells R that you want it to be an integer.

You could also create an integer vector like this. The colon (:) tells R to generate a sequence of vectors from 1 to 10, going up by 1 each time.

Some functions will also automatically generate integer vectors, like the function sample(). This function randomly samples a certain number of integer values within a specified range. I asked sample() to choose ten values between 1 and 10.

I’m not going to discuss this one because complex numbers aren’t used much in R for data analysis, though they exist. These are just numbers with real and imaginary components (containing the number i, or the square root of -1).

Characters are another common data type. These are used to store text in R (also called “strings”). To indicate something is a character, we put quotation marks around it "".

Putting quotation marks around numbers will also turn them into characters, which can get confusing.

You can’t do math with a vector of numbers that are classed as characters.

Why? Because R views them as text!

You can turn this character vector of numbers into a numeric vector using the as.numeric() function.

Note: a common case of this happening is if you happen to accidentally have a character value (i.e. a letter or symbol) in a column of values that are otherwise supposed to be numeric. Adding a space to a number or empty cell might have the same effect. This can happen accidentally (and so easily!) during data entry, so using as.numeric() is one way to resolve that issue. Any values that were character will be converted to NAs. In that scenario you’ll probably want to go back and fix your raw CSV file, but at least now the NAs will help you find where the problem was.

And then you can turn it back into a character using as.character().

The logical class is represented by only two possible values: TRUE or FALSE (also can be written T / F, but never true / false or t / f).

These values result from any logical statements that are made. For example, in the code below I asked R if the elements of my vector were greater than 5. This returns a logical vector where each element is either TRUE or FALSE.

You can also create a vector of logical statements.

This also means that you can do math with logical values. This is useful if, for example, you’re trying to see how many TRUE values you have in your vector. In fact, applying any math operations to a logical vector will automatically convert the values to 1s and 0s.

In the code below, I created a data frame showing the height and sex of five individuals.

Right now, the sex column is a character vector because I entered the data in quotation marks. But really what I want to do is tell R that sex is a categorical variable, with “female” and “male” as levels. To do that, all I have to do is use the as.factor() function.

You can see that R listed the vector and then beneath that, has figured out on its own that the levels are “female” and “male”. When writing the levels, R will sort them in alphabetical order. That’s why the levels are female male instead of male female.

You may want to change the order of your factor levels (this can be useful when plotting your data and determining the order in which they appear).

The order of the levels doesn’t make sense. We want it to go from first through fifth in the implied numeric order — not alphabetically. So let’s change the order using factor(vector, levels = c("first", "second", "third", etc.)).

Factors don’t just have to be text. They can also be integers. For example, in the code below I created a data frame describing the stream width and order of several stream sites. Stream order is not a continuous variable, even though it’s represented by numbers. It would be best to convert stream order to a factor.

Looks good. Since these are numbers, R just orders the levels in ascending order.

How to check and manipulate data types

As demonstrated throughout this tutorial, it can be useful to check the type of data you’re working with and be able to change it to another type if you need. You might need this especially in situations where you’re reading in data from a .csv, and need to check that all your numbers are numeric instead of characters.

That’s it for data types in R! Keep an eye out for our next tutorial, which will go over different data structures in R like vectors, lists, data frames, and tibbles. I hope this tutorial was helpful! Happy coding!

If you enjoyed this tutorial and want learn more about data types and how to use them, you can check out Luka Negoita's full course on the complete basics of R for ecology here: